A huge well done to our Senior Camogie team who had a fantastic win over Clara on November 19th in the All-County League Final to finish the season.

St. Brigid’s were dominant from the start and won the throw-in with Eimear Keoghan quickly gaining possession and putting the ball over the bar with half a minute gone. Clara soon replied with their own but Caoimhe Murphy took hold of the reigns and scored 1-1 in the space of two minutes with Marie Doheny following suit with another point soon after. Clara came back to score their only goal of the game in the fifth minute and backed it up with their second point straight after but then St. Brigid’s took the upper hand for the rest of the half and went on to put over another seven unanswered points, six from play with scores coming from Laureena Murphy, Caoimhe, Eimear and Kym Ryan. Our full and half backs put in serious effort to win the ball to make sure the forwards were supplied with opportunities and goalie Bronagh Neary stood strong between the posts pulling off serious saves that would rival any county goalie. This left the half time score at 1-10 to 1-3.
Clara opened the scoring in the second half with their fourth point of the game which came in the second minute after they won the throw in. Laureena cancelled this point with one of her own in reply and then Laura Hennessy and sub Claire Quigley put their names on the board when they both found the target between the posts. With ten minutes gone full forward Kym Ryan started off on a rampage on the Clara full back line and scored the first of her goals. Clara then scored their second last point of the half in the fourteenth minute, from here St. Brigid’s scored another 2-5 unanswered with both goals coming from Kym and points from centre forward Laureena and Caoimhe and Kym. In the 28th minute Clara converted a free but it was too little too late. Final score 4-19 to 1-6.
Team and scorers: Bronagh Neary, Sarah Mockler, Tara Walsh, Anna Robinson, Tara Hogan, Amy O’Connor, Ann Doheny, Laura Hennessy (0-1), Laoise Prendiville, Eimear Keoghan (0-3), Laureena Murphy (0-4), Caoimhe Murphy (1-6, 3 frees, 1 45) Marie Doheny (0-1) Kym Ryan (3-3), Katie Brennan.
Subs: Claire Quigley (0-1) for Katie Brennan, Celine O’Dwyer for Tara Hogan, Christine Caldbeck for Marie Doheny and Suin Corcoran for Kym Ryan. Emma Boland and Miriam Walton.

Thank you to all who came out to support the girls and again thank you to our brilliant management team of James Logue, Deirdre Prendiville and Anne-Marie Hoyne. Finishing the year on a high as Intermediate County Champions, Intermediate All-County League Champions and 7s All-Ireland winners! What a year for St. Brigid’s on the 40th anniversary. Roll on 2018 at senior level!! 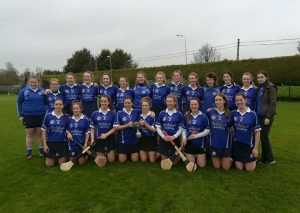