Our U11 team visited Ballyragget on the 16th of June to compete in the Roinn B competition.
The group consisted of Graigue Ballycallan, Kinvara from Galway, Portlaoise, Ballyragget and our neighbours Danesfort.
First up was Portlaoise and the boys came though with flying colours, raising green flags and winning comfortably.
Next up after a bit of a wait was Kinvara. The boys started very slowly and eventually overcame the Galway side with some great defending and a great goal in the closing minutes.
Then we had our near neighbours, Danesfort. Danesfort had beaten us in the final last year and perhaps this was in the minds of the Graigue Ballycallan players as they upped the tempo considerably and turned on the style to win the match well in the end to setup a top of the table clash with Ballyragget.
Graigue Ballycallan carried through the tempo, tenacious defending, great goalkeeping and the goal scoring exploits in this match to win well and finish top of the group.
The Semi Final was against Portlaoise who put up a good fight but the boys came through in the end to set up a final meeting with Ballyragget who had a great semi final win in extra time over Danesfort.
What a final we had!
Ballyragget upped their game considerably from our last meeting.
Early goals, tenacious defending, brilliant free taking and a goalkeeping display from the Ballyragget goalkeeper which would have made Eoin Murphy proud and to top it all off, Extra Time.
The game started at a frantic pace with Ballyragget buoyed by the extra time victory over Danesfort, attacking from the start but the first goal chance came for Graigue Ballycallan and went narrowly wide. On the next attack, Ballyragget scored a goal and it was game on. Points were traded over the next 10 minutes and the Ballyragget goalkeeper brought off 2 outstanding saves to preserve their 3 point lead at the half time break.
The second half started at the same pace with the Graigue Ballycallan boys peppering the opposition goal with shots and again the goalkeeper was equal to it. We slowly got on top and equalized and then went 1 point up with a minute to go in normal time. Ballyragget equalized with nearly the last puck of normal time.
And so to extra time and hearts in the mouth for the first half as both sides traded scores and then a crucial goal for Graigue left us 3 points up at the start of the second half. The boys really pushed on in the last 5 minutes and put the game safe with a great goal and the cup was coming home to Graigue Ballycallan. 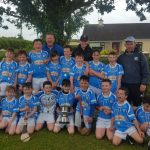 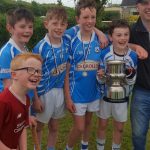 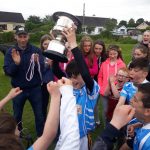