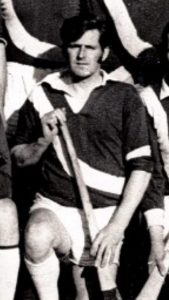 Joe Millea, whose sudden passing on Thursday 30th January 2020 was a much loved and respected member of our parish. A man of great qualities, he endeared himself to all whose path he crossed in his 78 years.

A devoted family man, his wife Helen, daughters Tracy and Sinead, sons Sean and Niall were paramount to everything he did. As the family extended he welcomed them into the fold with open arms. He loved the company of his grandchildren.

He will be sadly missed by his many great neighbours and friends throughout the parish and county. He was an outstanding hurler who gave great service to Graigue Ballycallan GAA Club winning a Northern Junior title in 1970 and a Junior Football title in 1960. END_OF_DOCUMENT_TOKEN_TO_BE_REPLACED

It’s that time of year again, Graigue Ballycallan GAA Club Forecast Competition is now up and running for 2020. With the draws completed for the 2020 League pairings, our hard-working committee will be out around the county and beyond over the next few weeks trying to get the support of the GAA Community.
We are keeping the cost of entry for 2020 at €10 per entry, click on the link below to play online
Play GBC Forecast Competition online here

Graigue Ballycallan GAA Club will hold a Registration evening this Saturday 25th January in the clubrooms at 7.30pm. We look forward to seeing all the familiar faces and would welcome new members.

Registration Fees are as follows: 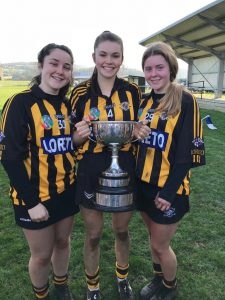 Congrats to our club girls, Moya, Kate and Claire who were part of the Loreto winning panel today in the Leinster Schools Camogie A Final in Thomastown on a scoreline of 1-17 to 0-5.

Hard luck to our club girls who were part of the Presentation team – Tara, Lauren, Margaret and Reece.

The AGM of the Graigue-Ballycallan GAA Club took place in Tom Ryall Park, Kilmanagh on Saturday 11th Jan. The Chairman, Dave O’Neill opened the meeting by observing a minutes silence for all club members who had passed away during the past year, mentioning former member and great club supporter Tom Brennan and Maura Comerford and Julia Hennessy who had been interred in the past week. He also included all who were battling illness in the parish.  END_OF_DOCUMENT_TOKEN_TO_BE_REPLACED

Date for the Diary: Graigue Ballycallan GAA Club will hold their AGM this Saturday 11th Jan at 7.30pm in the Clubrooms at Tom Ryall Park. Deceased members of the Club will be remembered at the 6.30pm Mass in Kilmanagh immediately preceding the meeting. All members are asked to make a big effort to attend!

2019 U16 St. Brigid’s camogie and there were huge expectations for 2019. Why? Well as 2018 Roinn A champions after our memorable win over Thomastown in Bennettsbridge this was a grade where we enjoyed success. We lost a number of key players from 2018 but still held on to the majority of the 2018 panel, so we were quietly confident of doing well. Unfortunately we were dealt a cruel wrong when we lost our excellent goalie Ellie O’Neill to the dreaded cruciate injury for 2019.

END_OF_DOCUMENT_TOKEN_TO_BE_REPLACED 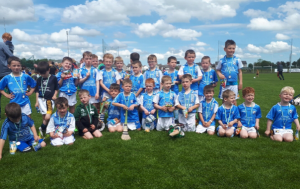 Over 30 very enthusiastic boys hurled, trained and had great craic together during the year for our U7 group. We usually trained on Saturday mornings and played numerous games and blitzes throughout the year. It was fantastic to see the players develop and gain confidence and most importantly, have fun along the way. Thanks to the parents for their co-operation and sincere thanks to the coaches for generously volunteering their time.

Report by Philomena Brennan
Little did the founding fathers of our great club know back in the Spring of 1969 that their hopes and dreams of a united club would, fifty years later, culminate in a night of celebration which saw nearly 300 people pack into the Set Theatre in John Street to proudly announce that they were proud to be members of the Graigue-Ballycallan GAA Club.
END_OF_DOCUMENT_TOKEN_TO_BE_REPLACED 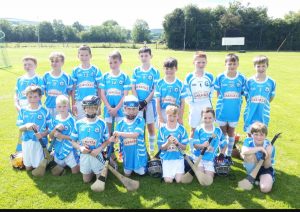 Our U13’s competed in Roinn B in both Football and Hurling in 2019. We returned to training last February under lights in Loreto Astro turf, then returning to Tom Ryall Park in late March. We used the Football League to give game time to all the panel while getting ready for the Championship in April. We lost to Glenmore 4-6 to 3-2 in the opening round. Most of the panel enjoyed an extended run with St. Aidan’s school team which brought them to a Quarter Final in Roinn B and a Semi Final in the Country Cup.

Our league campaign ran from mid June to end of July. We were very competitive in all our matches, winning two, drew one and lost four to finish mid table. We prepared well for championship over the next few weeks where we played a fancied Galmoy/Windgap side. Again this young team gave everything for the jersey but lady luck deserted the boys who bowed out on a scoreline of: Galmoy/Windgap 3-9, GBC 1-9.( We were short 3 players due to holidays)

With the dates of League and Championship clashing with summer holidays, management never got a chance to play their strongest 15, nonetheless it gave everyone on the panel an opportunity to stake a place on the championship team. Overall, management were very happy with how the players carried themselves throughout these matches, the panel was very young with 5 U11’s starting v Galmoy/Windgap. A number of these players were involved in U14 and U12 tournaments throughout the year as well. Thanks to the ladies who looked after first aid during the year, Claire Roberts (Juvenile Secretary) and Maurice Ronan for their help during the year.
PANEL: Sean McGrath, Elliott Teehan, Cillian Hoyne, Ben Young, Aidan Comerford, Paidí Egan, James O’Halloran, Frank McCluskey, Tony Butler, Robbie Tector, Eoghan Cahill, Shane Cody, Robbie Lynch, Martin Brennan, Michael Tynan, Oran Hoyne, Keelan Lynch, Shane Hogan, Ben McEvoy, Aidan Ging, Cormac Neary, Sean O’Halloran, Andrew Tector.
Report by Niall Egan

Congrats and well done to Billy Dowling and Jack Butler who were part of the St. Kieran’s College panel who won the Junior Colleges All Ireland Final yesterday beating Presentation College Athenry in extra time. 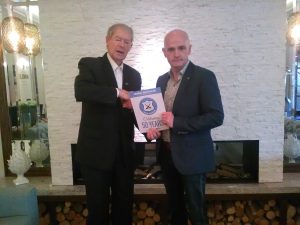 Friday 22nd November will be be a night to remember as we celebrate our club’s 50th year. We have a great night’s entertainment planned for The Set Theatre, Kilkenny!

We will be launching a book filled with great memories over the last 50 years and we have the legendary Mícheál Ó Muircheartaigh as Special Guest on the night to launch the book. This will be followed by a ‘History of the Club’ presentation and there will be a Q and A with some of our former players. This is a free event but Please Note it is Strictly Over 18s.

Doors will open at 7.30pm with the book launch commencing at 8pm SHARP.

Pictured above is our Club Chairman, Dave O’Neill presenting the final draft of the book to Mícheál Ó Muircheartaigh when he met him last week.