All posts relating to u16 news and match reports 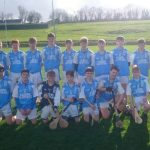 Graigue Ballycallan U16s are preparing well for their upcoming League campaign. Under new management of Philip Heafey and Tommy Manogue, they’ve played two competitive challenge games against Roinn A opposition in St. Martins and Kilmacow. Training has gone well in the Loreto all-weather and are now back in Tom Ryall Park with the League first round approaching fast.

The 2016 season for the Graigue-Ballycallan U16s opened with a challenge in March against their neighbours John Lockes in Callan. It gave the new mentors of Mark O’Brien, Michael Egan and Martin Delahunty an opportunity to see what the year would bring. Mark and Martin had previously worked with this group of boys at U14 level which saw them manage the boys to reach a Roinn B County Final where they made a gallant effort before succumbing to a stronger Bennettsbridge side. Numbers at this grade have always being a problem with only five boys playing up to their age.
END_OF_DOCUMENT_TOKEN_TO_BE_REPLACED

The U16 GBC team had been drawn to play a Preliminary Round in this year’s Roinn B Championship and this outing took place last Monday 25th July in Bennettsbridge. Their opponents were Barrow Rangers and the locals expected a tough encounter, which was to prove very prophetic indeed. GBC were forced to line out minus a few players due to injury which has been an issue the mentors have had to deal with all season.
END_OF_DOCUMENT_TOKEN_TO_BE_REPLACED

The final round of the U-16 Roinn B League took place in balmy conditions in Tom Ryall Park last Friday 8th July 2016. This was the last match to be played in the group and GBC were placed second in the group before the encounter. With three players on the injured list, the mentors had to turn to some of the younger boys to field a team, but as usual they were not found wanting in their efforts and enthusiasm for the battle. END_OF_DOCUMENT_TOKEN_TO_BE_REPLACED

As we fast approach the State Exam season and match play has been suspended for all those who are sitting the up-coming Junior and Leaving Certificate, it is perhaps an opportune time to report on the club’s U-16 team season to date.

In 2014 this group of boys had a great year which culminated in a Roinn B County Final appearance, losing out to a highly fancied Bennettsbridge team. END_OF_DOCUMENT_TOKEN_TO_BE_REPLACED

Duggan Steel Under 16 Hurling League 2016 Roinn B Group A

Graigue Ballycallan  U16s were in Roinn A as a result of winning U16 Roinn B in 2014. Expectations for 2015 were high and the aim for the year was to be competitive.

We operated with a small tight panel as numbers are low towards other years, usually only togged with 19/20 when without the U13s.

With 12 teams in Roinn A League, we were in Group B, avoiding city teams O’Loughlins, Dicksboro, James Stephens and Naas. In our Group we had the best of the country teams Ballyhale, Thomastown, Mooncoin, Danesfort and Dunnamaggin. END_OF_DOCUMENT_TOKEN_TO_BE_REPLACED

Report by Adrian Ronan
Within a week of O’Loughlin’s being crowned U16 Roinn A County Champions, GBC had the opportunity of playing them in the League Final. Having been beaten in the first round comfortably by O’Loughlin’s in August, GBC were eagerly looking forward to the League Final. We had worrying injures going into the match but Conor Flynn, Jesse Roberts and Sean Ryan ignored these and made huge contributions.
So all headed to Freshford knowing that a huge performance was demanded and if we got that performance, well, we would ask questions of this excellent O’Loughlin’s team. This O’Loughlin’s team were unbeaten in two years in all competitions so we knew the task was massive.

END_OF_DOCUMENT_TOKEN_TO_BE_REPLACED

All roads led to Palmerstown on the 3rd August last, as the U-16s took on the city side O’Loughlin Gaels in the first round of the Roinn A Championship. When the draw took place in early Spring, it was acknowledged that this would be a tough test for the locals. However, with good form displayed in the league the GBC boys and their mentors embraced the challenge and put everything into training coming up to the fixture. END_OF_DOCUMENT_TOKEN_TO_BE_REPLACED

After a great campaign in the Roinn A u-16 league, the GBC boys shared the top position on the table with their counterparts from the south, Ballyhale-Shamrocks. Consequently a play-off situation existed and it was all roads to Dunnamaggin on Friday last to determine who would take the honours of heading the group and earning a place in the Roinn A League final for 2015. END_OF_DOCUMENT_TOKEN_TO_BE_REPLACED

Best of luck to all our juveniles who are in action at the weekend with Kilkenny Development Squads in various grades. 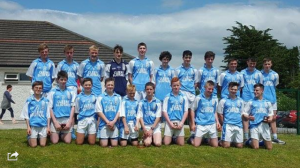 Well done to the U16s on winning the Jim Buggy Memorial Tournament on Saturday 4th July in Castlecomer. A special well done to some of the U14s who stepped up to the mark when they were called upon and showed great bravery and determination! Match reports to follow.