The annual Mary McGrath Table Quiz will take place in the Pound, Ballycallan on Holy Thursday night 18th April. Tables of 4, €20 per table. Come along for a night that always guarantees a laugh and great social night.  All Welcome.

Our Senior camogie team played the fifth and final round of the All-County League on Wednesday July 11th in Kilmanagh. The game started out as a 12 a-side game so the use of space was vital and work rate was key from the start. Co-captain Therese Muldowney got the scoring off to a start with a point in the third minute. END_OF_DOCUMENT_TOKEN_TO_BE_REPLACED

A huge well done to our Senior Camogie team who had a fantastic win over Clara on November 19th in the All-County League Final to finish the season. END_OF_DOCUMENT_TOKEN_TO_BE_REPLACED

Please support the girls this Sunday 19th November as they take on Clara in the Intermediate All-County League final. Throw in at 11am in Clara. Best of luck to all involved as they hope to finish the year off with another piece of silverware! 🔵⚪

Our Intermediates took on Myshall, the Carlow champions, in the Leinster Intermediate Club Championship Quarter Final on Sunday 15th October in Tom Ryall Park in front of a large home crowd. It was going to be a tough battle as Myshall are last years All-Ireland Intermediate club winners. END_OF_DOCUMENT_TOKEN_TO_BE_REPLACED

On Sunday 8th October our intermediates took on Clara in the Marble City Travel Intermediate County Final in the MW Hire Training Centre, Dunmore. A fantastic crowd showed up to support the girls in what turned out to be a magnificent day for the club. END_OF_DOCUMENT_TOKEN_TO_BE_REPLACED 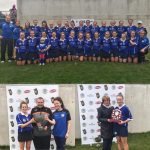 After a 15 year drought, our Intermediate Camogie team have won the County Final in the same year the club is 40 years old. What an achievement! They took on Clara in the MW Hire Training Centre in Dunmore on Sunday 8th October. After a thrilling battle the final score was St. Brigid’s 1-13 Clara 1-11. Well done to all the girls and management who have worked so hard this year to get to where they are. Well done also to Eimear Keoghan who was presented with the Player of the Match award also. END_OF_DOCUMENT_TOKEN_TO_BE_REPLACED 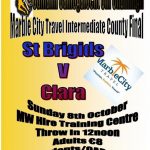 Please support our Intermediate Camogie team who compete in the County Final this Sunday against Clara. Throw in at 11.40am in the MW Hire Training Centre in Dunmore. We know Sunday will be a busy day for all but please encourage friends and family to come to support the girls as they hope to take the silverware home to the club & achieve Senior status for next year. Please share and spread the word and bring the blue and white colours! Best of luck to the team and management!

Well done to St. Brigid’s Intermediate Camogie team who are through to the County Final after a great Semi Final win over Gowran. After losing by two points to Gowran two weeks previous, the girls were out for revenge and were determined to book a place in this year’s final. END_OF_DOCUMENT_TOKEN_TO_BE_REPLACED

Well done to the intermediates who beat St.Anne’s/Emeralds in the championship quarter final on Sunday 24th September in Galmoy. St. Annes/Emeralds were the first to start off the scoring when they scored a point from a free in the first minute. END_OF_DOCUMENT_TOKEN_TO_BE_REPLACED

St. Brigids intermediates took on Gowran in the last round of league games on the 17th September in Kilmanagh. After having played each other in a challenge game in March and also in the All-County league in June they knew it would be a fierce challenge. It was intense from the start with a tough battle in the middle of the field from the off. END_OF_DOCUMENT_TOKEN_TO_BE_REPLACED

A huge congratulations to our Intermediate 7s team who are the 2017 Kilmacud Crokes 7s Intermediate champions. They took part in the tournament on Saturday 9th September and were drawn against Rathgarogue Cushinstown of Wexford, Kilmacud Crokes of Dublin and Carrickshock. END_OF_DOCUMENT_TOKEN_TO_BE_REPLACED